The Best Exercises For Abs 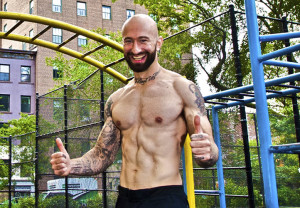 One of the most common questions I get asked is, “what’s the best way to work your abs?”

Most people who ask are concerned about aesthetics – they want to get a six pack – but core training can be functional too. That’s why the best ab exercises will do much more for you than just help you get the washboard look (which has more to do with diet anyway).

Abs and Functionality
In order to understand why certain exercises are better than others, you must first understand the role that your abs play in the musculoskeletal system. The abs (or rectus abdominus as they are technically known) function primarily as a stabilizer muscle – they keep your torso upright while you’re standing, walking or performing other movements. For this reason, the best way to work your abs is to use them to stabilize your trunk in difficult positions. Rather than attempting to isolate them with crunches, I’ve found it more satisfying (and effective) to work my abs in the context of my entire body.

Top Three Exercises for Abs
While it’s hard to say any one exercise is the best for abdominal training, these three are all arguably in the running:

The Plank
Think of your abs as a bridge that connects your upper body to your legs. Since you’re in a horizontal position when performing a plank, your abs will have to work considerably harder to keep your body properly aligned than when you are simply standing or walking. The plank is typically held isometrically while balancing on your elbows and toes, but part of what makes planks so great is that they can be modified to suit all fitness levels.

Novices can start on their knees, instead of their toes, while intermediate level trainees can try lifting up an arm and/or a leg. When you get the hang of that, you can start experimenting with planking on an unstable surface. For another variation, try bringing your knees to your chest one at a time while holding a plank.

Hanging Leg Raises
Hanging leg raises require tremendous abdominal strength and stability. In addition to keeping your body stable (swinging is a no-no), the abdominal muscles must also work to lift your legs up during this exercise. See my hanging leg raise exercise tutorial for more information.

The L-Sit
Try doing a hanging leg raise and stop when your legs are extended at a right angle to your torso. While an L-sit is typically performed with the hands resting on the ground (or holding parallettes), holding your body in the “L” position is a difficult task in either position.

Though most commonly seen in gymnastics, the L-sit is a great exercise for anyone who is serious about building core strength. Like the plank, it is often held in a fixed position for a given amount of time. When you get comfortable with the L-sit, you may be ready for advanced core exercises like levers, dragon flags or the planche.

ABS – Always Be Stabilizing
Any time you have to stabilize your torso, your abs get a workout. That’s why core strength is such a huge part of performing even basic bodyweight exercises like push-ups and pull-ups. With bodyweight training, you’re always working your abs.

Watch the video below for more: