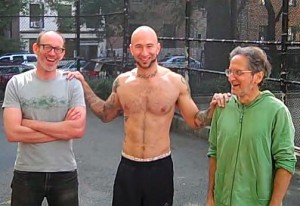 A lot of people in the calisthenics community know about Tompkins Square Park. It’s where the Bar-barians train, it’s where I train and thanks to youtube, it’s become a legendary park for bar training all over the world.

There is another group that trains at TSP, however. One that you’ve probably never heard of unless you’ve spent some time there yourself. That is, until now.

Old Dogs, New Tricks
A lot of people write to me with concerns about starting strength training later in life. In the video below, you’ll see three men in their 50’s and 60’s busting out some high level calisthenics. One of the fellows featured didn’t even begin this type of training until his 50’s.

Prepare to be amazed:

47 thoughts on “Never Too Old to Work Out”

Get the official Al Kavadlo app!!

Al Kavadlo is not liable for any injuries or damages that individuals might incur by attempting to perform any of the exercises or feats of strength depicted or discussed on this website. Any individual attempting to does so at their own risk. Consult with your physician before beginning an exercise regimen.