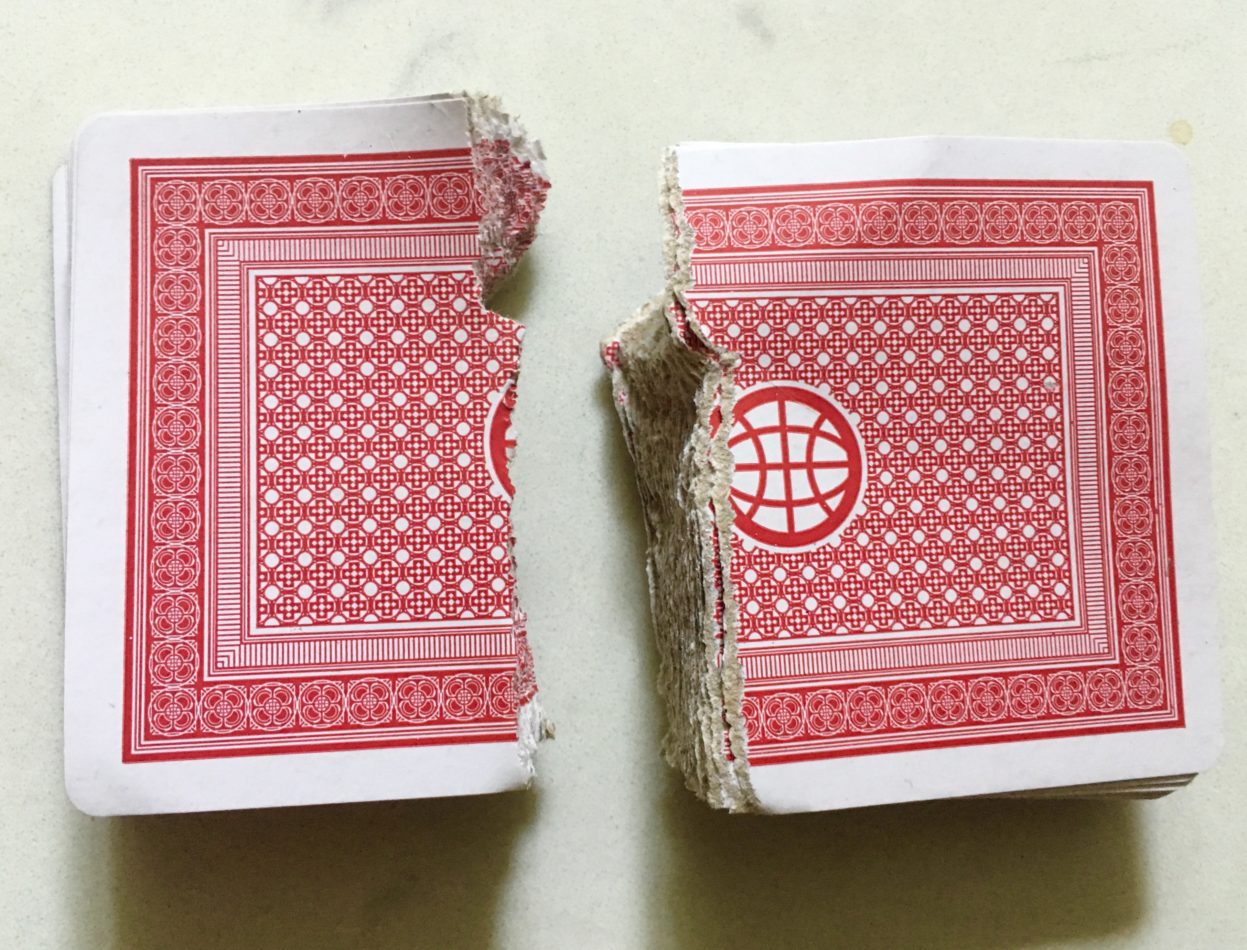 Learning to Tear a Deck of Cards in Half

Last Halloween I went to see my friend Adam RealMan perform his one-man sideshow act, which includes everything from sword swallowing and eating lit cigarettes, to bending steel and tearing decks of cards in half barehanded. Fun for the whole family!

I’d witnessed card tearing before on several occasions and found it to be entertaining and impressive, but I’d never thought to try it myself until that fateful evening.

After watching Adam’s performance, he and I got to talking and I happened to inquire about the card tearing feat. He immediately reached into his back pocket, whipped out another deck, handed it to me and told me to give it a shot.

After a quick primer on technique, I grabbed the deck as instructed and did my best to rip it in two.

“C’mon, Al – I know you’re strong! You can do this!” Adam said encouragingly, but alas he was mistaken. Instead of the cards tearing, it was the skin on my hands that tore, and I began to bleed.

“Oh yeah, that’s normal!” Adam told me. “My hands bled the first few times I tried it, too!” he continued.

After letting me struggle with the deck for a minute, Adam took the cards back from me and promptly finished what I had attempted to start, easily ripping the now twisted deck in two.

He then handed me another sealed deck from his pocket (circus people apparently carry multiple decks of cards on them at all times) and instructed me to go home and practice.

“Split the deck in half and see if you can tear 26 cards. Then build up from there.” he instructed me.

When I got home I followed his advice and was able to rip the half-deck in two. The next morning I ripped the rest of the deck in half. Then I went online and ordered a case of playing cards so I could continue practicing.

Other than the advice Adam Realman gave me on Halloween, and a few videos I watched on Youtube, I didn’t have much to go on besides my own trials and errors. So I kept working on tearing 20-30 cards at a time, and gradually started to increase that number.

Six months later I finally managed to tear a full deck of cards in half without crying, cursing or bleeding. Soon thereafter I did it on video and shared it to Instagram. It’s not pretty, but here it is:

Ive recently unlocked the ability to tear a deck of cards in half with my "bear" hands. One more party trick to add to my repertoire of pointless feats of strength. Still needs some cleaning up, but I can finally do it without crying, cursing or bleeding. 😂💪 #GripStrength #FeatsOfStrength #OldSchoolStrong #CardTearing #NotCalisthenics 😮

Card Tearing Technique
After I shared that video, I sent it to Adam to get his feedback. His reply basically boiled down to, “That’s nice, but you’re doing it wrong.” Adam pointed out that when I tore the cards, the rip was beginning by the bottom of my hands and going up toward my fingers. He then informed me the correct way to do it is by initiating the tear from the top down.

I went back and re-watched those card tearing videos again and saw that Adam was right. All the guys on YouTube – including Logan Christopher, Jedd Johnson and Adam T. Glass – start the tear from the top down. It’s amazing how we can miss some of the smaller details when learning something new (even if those details are clearly demonstrated, as they are in those videos).

So the next few times I practiced tearing cards, I attempted to rip them from the top down, but no matter what I tried, the tear still started from the bottom. I couldn’t figure out what I was doing wrong.

After asking around in my inner circle, it was recommended to me that I contact Chris Rider, one of the world’s top performing strongmen, and a fantastic teacher from what I’d heard.

Turns out Chris’ coaching helped a lot. In fact, during my first card tearing session with Chris, I made as much progress as I had in the previous few months training on my own. I obviously didn’t get any stronger in one hour, but Chris helped fix my technique. I was able to apply his advice effectively because I had built a lot of hand strength from practicing on my own already, even though I’d been making some mistakes. As my brother Danny always says, Everybody Needs Training – even me!

The technique Chris taught me starts by clutching the deck horizontally with the thumb, index finger and middle finger of your non-dominant hand. If you are right-handed like me, this means you’ll clutch the deck in your left hand. Once you’ve got a tight grip on them, aim to curve the cards in toward your palm slightly, then pinch the top corner of the opposite side of the deck between the thumb and the index finger of your dominant hand. Don’t put the fleshy part of your thumb on the deck. Instead, pinch it between the thumb itself and the outside of the index finger. This was the main mistake I was making before Chris corrected my technique.

Once both hands are in place, keep a firm grip and twist the cards into an S-like position by turning the top corner upward with your dominant hand as you continue to curl the opposite end of the deck slightly downward into your palm. Use your dominant hand to tear the deck toward you, while the other hand twists away, like you were revving a motorcycle.

Initiating the tear can sometimes be easier than finishing it. The final few centimeters are often the toughest part. As such, you may need to adjust the position of your hands slightly in order to complete the tear. It can help to slide the index finger of your non-dominant hand into the tear for more leverage on that side. You’ll also want to ease up on curling the deck inward. The S-curve is helpful to start the tear, but can make it harder to finish.

Here’s a more recent tear of mine with better technique:

I’ve finally gotten to the point where it takes me longer to open a new deck of playing cards than it does to tear them in half. 😜 #CardTrick #OldSchoolStrength

Wild Card
Some of you may be wondering why a calisthenics devotee like myself would spend so much time practicing a strongman feat like card tearing.

It’s a reasonable question, and my answer is that – just like calisthenics – card tearing is simply a lot of fun!

Furthermore, learning to tear a deck of cards is actually more like getting your first muscle-up than you might think.

In fact, all the physical feats I’ve achieved it my life require the same three fundamental things:

1 – Progressive Overload
Every form of strength training operates under the principle of progressive overload, which refers to developing strength through incremental resistance increases over the course of several weeks or months. In weight training, practitioners start with a light weight and slowly add more over time. In calisthenics, beginners build a foundation with basic exercises and work their way up to harder ones (pull-ups before muscle-ups, etc.).

In the case of card tearing, progressive overload just means beginning with fewer cards, then gradually working toward the full deck. I started with a half deck, but you can start with 15 or 20 cards and build up from there if a half deck is too much. Treat it like any other exercise: Practice a few times a week, doing 3-5 sets each session (each tear counts as one set), and aim to train at around 65-80% of your maximal strength. You shouldn’t be trying to tear as many cards as possible every time. It’s easy to get carried away with this, so take a week off if you begin to feel pain in or around your elbows.

2 – Tolerance for Discomfort
In the beginning, your hands will hurt, but after a while you’ll get used to the sensation of the cards pressing into your skin. You may even start to develop callouses in strange new places. It’s just like how people who are new to pull-ups experience discomfort due to hanging from the bar, but eventually their hands toughen up and it is no longer an issue.

3 – Technique/Specificity
Like anything, the more you practice card tearing, the better you’ll get. You can understand the technique theoretically, but knowing it in a deeper sense only comes from firsthand experience, so be prepared to practice a lot before it really starts to sink in. I’m still not where I want to be with this skill, but I’m enjoying the journey.

Changing of the Card
A few months into my card tearing odyssey, my mom told me that I had some old junk laying around in her attic that she wanted me to throw away. Among the boxes were a bunch of old baseball cards from when I was a kid. For a second I was going to throw them out, then I realized I could use them for tearing!

I soon discovered that the type of cards you use can significantly alter the difficulty. In tearing several different brands of baseball cards, I found that some of them were thicker and harder to rip than others. (Don’t worry, none of them were particularly valuable.)

Even within the world of playing cards, there are many different brands and varieties, and some are harder to tear than others. The same brand of card won’t even be totally consistent from deck to deck. I encourage you to experiment with a variety of cards. The nice thing about the tougher ones is that you don’t need to use as many in order to challenge yourself and effect change.

Grip training is some of the most functional training you can do because we use our hands throughout the day more than just about any other part of our body. Most of us carry bags, open jars and pick up random objects every day. Since I’ve been practicing card tearing, I’ve noticed all of those tasks are starting to feel a little bit easier.

Though some will dismiss card tearing as a silly trick with no practical value, I believe it’s a great way to strengthen your hands and fingers, as well as your mental fortitude.

And there’s nothing wrong with being able to keep your friends entertained at parties.