One Arm Pull-ups and One Arm Chin-ups 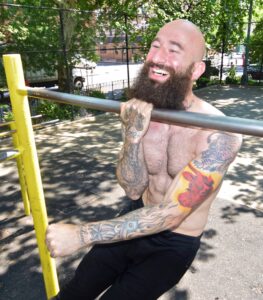 A long time ago, a client of mine asked me if I’d ever seen anyone do a one arm pull-up. I stood for a moment in silent contemplation, then lifted one hand, wrapped it around my opposite wrist and said, “ya mean like this?”

“No,” he said, “without the other hand assisting at all.”

I told him I hadn’t, adding that I didn’t think such a thing was even possible – boy was I wrong!

I’ll never forget the first time I saw someone do a one arm pull-up. It was a game-changer and now I’m a believer!

Pull-up or Chin-up
If you want to get technical about it, a pull-up is done with a pronated (overhand) grip, while a chin-up implies a supinated (underhand) grip. A lot of people find that the pull-up is a more difficult exercise – this tends to be especially true for beginners.

When you do a one arm pull-up, however, there’s a certain amount of unavoidable rotation. This is why many of the people who can perform this feat on a bar will wind up pulling towards their opposite shoulder. When a one arm pull-up is performed on gymnastic rings, the ring will simply rotate to account for this.

For me, the disparity between overhand and underhand grips seems negligible, though I’ve done so many reps of different kinds of pull-ups over years that I may have just evened it out. Besides, when someone is strong enough to pull their chin over the bar with just one arm, they’ve earned my respect; belly-aching over their hand position seems pointless.

Training for a One Arm Pull-up
Only once you can perform at least 15 consecutive dead hang pull-ups should you even consider training for this feat. Tendinitis is a bitch, so back off if you start to get pain in or around your elbows.

The following methods have helped me on my quest for the one arm pull-up, but keep in mind that these are not the only ways to train towards this feat. There are many paths that lead to the same destination–feel free to be creative!

One Arm Flex Hangs
Just like learning to do a standard pull-up, performing a flex hang (holding your body at the top of a pull-up position) with one arm is the first step towards doing a one arm pull-up. Pull yourself up using both arms, then try to stay up while you take one hand away. Squeeze your whole body tight while keeping your legs tucked in close when you’re starting out. With practice, eventually you be able to try it with your legs extended.

One Arm Negatives
The idea here is to keep your body tight and controlled while slowly lowering yourself down from a one arm flex hang. Be prepared that the first time you try to do a one arm negative you will drop very quickly. When starting out, don’t even think of it as a negative, think of it as just trying to keep yourself up. Gravity takes care of the rest. Eventually, try working up to the point where you can make a one arm negative last for ten seconds or longer.

Archer Pull-ups
Archer pull-ups are a great exercise regardless of if you want to work towards a one arm pull-up or not. When performing the archer pull-up as practice for the one arm pull-up, try to do as much of the work as possible with the arm closer to you. Think of your extended arm simply as a means of giving your pulling arm assistance, so use it as little as possible – eventually you won’t need it at all. (You can also spot yourself with your secondary arm by draping a towel over the bar and holding it or grabbing the pull-up bar frame.)

Hard Core
Just like a one arm push-up or a pistol squat, core strength plays a huge role in one arm pull-ups and chin-ups. Think about keeping your entire body tight and controlled during your one arm pull-up training. If your core is weak, you may need to do some remedial ab exercises.

Pull-up or Shut up
Talk is cheap. The one arm pull-up is an elusive move that demands patience, consistency, and dedication. You’re never gonna get one without lots of practice. The question you need to ask yourself is this: How bad do you want it?

For more information about one arm pull-ups, check out my book, Raising The Bar: The Definitive Guide to Pull-up Bar Calisthenics.